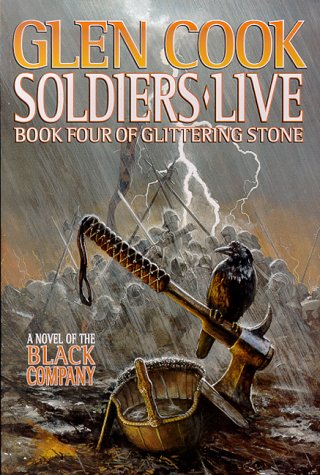 Alchemical Words reviews Soldiers Live, the last published book in The Black Company series of epic military fantasy novels by author Glen Cook. There are rumors of two more volumes in the works but the estimated publication date is sometime in 2015 at the earliest so we’ve got a while to wait to see what else Glen cooks up…sorry, I couldn’t resist. It was just too easy (cheesy grin).

When sorcerers and demigods go to war, those wars are fought by mercenaries, “dog soldiers, ” grunts in the trenches. And the stories of those soldiers are the stories of Glen Cook’s hugely popular Black Company novels. If the Joseph Heller of Catch-22 were to tell the story of The Lord of the Rings, it might read like the Black Company books. There is nothing else in fantasy like them.

Now, at last, Cook brings the “Glittering Stone” cycle within the Black Company series to an end…but an end with many other tales left to tell. As Soldiers Live opens, Croaker is military dictator of all the Taglias, and no Black Company member has died in battle for four years. Croaker figures it can’t last. He’s right.

For, of course, many of the Company’s old adversaries are still around. Narayan Singh and his adopted daughter — actually the offspring of Croaker and the Lady — hope to bring about the apocalyptic Year of the Skulls. Other old enemies like Shadowcatcher, Longshadow, and Howler are also ready to do the Company harm. And much of the Company is still recovering from the fifteen years many of them spent in a stasis field.

Then a report arrives of an evil spirit, a forvalaka, that has taken over one of their old enemies. It attacks them at a shadowgate — setting off a chain of events that will bring the Company to the edge of apocalypse and, as usual, several steps beyond.

If I’m going to do this without spoilers, I’m not really going to be able to tell you about all the incredible plot twists and turns. Soldiers Live begins several years after the conclusion of Water Sleeps and Cook has created something of a rollercoaster ride of plot turns and unexpected conclusions. The Company is rebuilding in a world behind one of the 16 shadowgates the open up off the Glittering Plain. We find that this particular world is likely the very same world where the Nyueng Bao originally came from.

The Company is plannign a return to Taglios to finish their fight against Soulcatcher, Mogaba, the Daughter of Night and Narayan Singh before Kina the Goddess of Death manages to return and bring about the Year of Skulls and destroys the world.

It’s fitting that the concluding novel of the series is about conclusions: Khatovar, Croaker, The Lady and their daughter, the shapeshifter, Lisa Bowalk, and her ongoing feud with Goblin and One Eye, Narayan Singh and Kina, Shivetya’s one fervent desire… there’s a lot to tie up.

We finally get to see Khatovar. The Black Company is the very last Free Company of Khatovar, though after 500+ years, no one in the Company really knows what that means. What Cook shows us is a fitting resolution but not what I expected. Narayan Singh and The Daughter of the Night are still trying to bring about the Year of the Skulls and send the world to its doom while Shadowcatcher, Longshadow, and Howler are plotting and planning their final revenge.

Sleepy is still in command and Croaker, the original narrator of the series, is back as Annalist and much of the story is told from his point of view. It makes sense for Cook to return to Croaker as the narrator for the closing book, especially considering the finale and I agree with his choice.

I’ve read reviews where the other reviewers loved Croaker. But for some reason, I’m just not in love with Croaker as narrator. Bitter, cynical and melancholy…granted, he has every right to be but I’ve just never developed the liking for Croaker that so many readers seem to have. It makes me feel like I’ve missed something important so I might consider a re-read of the series at some point in the future.

Overall, I’m giving Soldiers Live 4.5 out of 5.0 stars If you’ve read the series, I’d be interested to hear what you think. 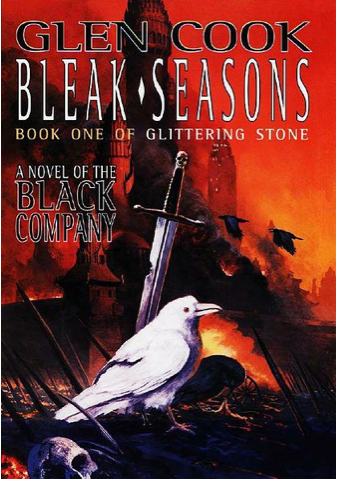 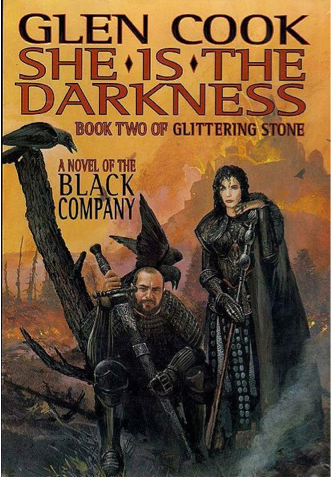 She Is The Darkness – Fantasy Book Review